The other day, someone asked me what wrist you should wear a watch on. If you’re a habitual watch wearer like me, you may have no idea why you wear it on the wrist you do, or even if it is the ‘correct’ wrist.

However, there have historically been some conventions that dictate what wrist you should wear your watch on.

This article will cover which wrist you should put your watch on for your specific situation, and the benefits associated with the decision.

Why Should You Wear Your Watch on your Non Dominant Wrist?

As aforementioned, there are a plethora of reasons to wear your watch on your non dominant wrist.

Are You Supposed to Wear Your Watch on Your Left Wrist?

You may have been told by your parents to wear your watch on your left wrist.

This makes sense, as most of the population are right handed, meaning when watches were introduced, people likely started wearing them on their non dominant wrist. And, as usually happens, the majority habit became the norm, and has been passed down through the generations.

But this advice also stems from the fact that traditional timepieces are designed for right handed people.

The crown is situated on the right of the watch, and can only be easily accessed by your right hand when on your left wrist. This isn’t the case if you wear your watch on your right hand, as you would have to reach around or over the case to get to the crown.

However, as you’re not going to be changing the time very often, this benefit and tradition is now somewhat defunct, and isn’t worth following.  It’s not worth compromising comfort for, especially if you’re wearing a digital timepiece which usually has the buttons placed on the top of the watch.

It’s interesting to note that some manufacturers such as Tutor produce left handed versions of their watches, allowing someone who wants to wear their watch on their right hand to keep the traditional benefit of crown accessibility.

Wearing Your Watch on Your Right Wrist

A major disadvantage of wearing a watch on your right wrist is that a large majority of tasks are designed to be carried out with a right hand.

Computer mouses, scissors, and doors are all designed for right handed people. Many tasks will force you to use your right hand, so if you wear your watch on your right wrist, it could get in the way, and is more open to getting damaged.

Therefore, a left handed person may find it beneficial to wear their watch on their left hand, especially if they are carrying out a job that requires the use of these sort of items, such as typing up reports.

What wrist should a Male or Female wear a watch on?

In some cultures, more specifically in the east, it was the norm for men to wear watches on their left wrist, and for women would wear them on their right.

However, this tradition is now less prominent and adhered to, and in most places in the world, the wrist you wear your watch on now has little to no baring on your gender. 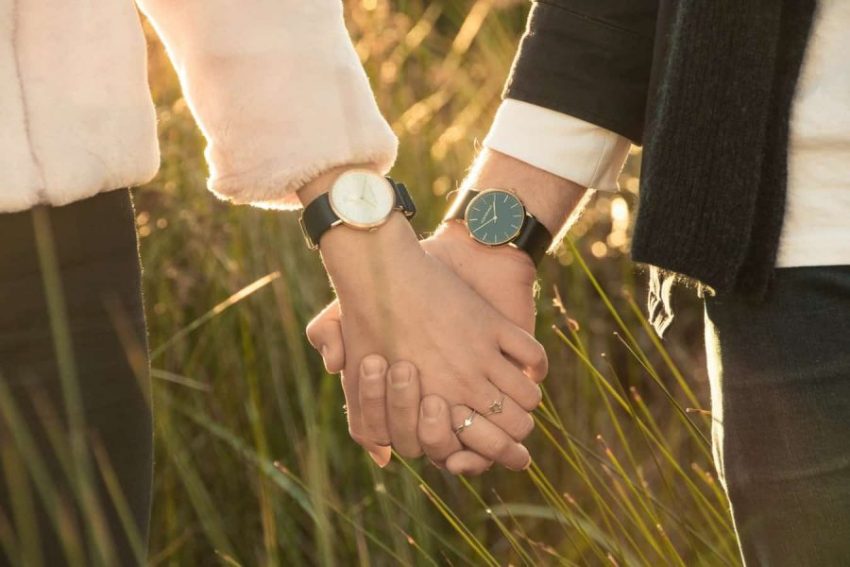 The tradition probably stemmed from the ‘left-right brain theory’, where it is said that the right side of the brain is more feminine, as is associated with creativity and emotion, and the left side is more masculine, and is associated with logic.

Therefore, due to these biases, the sexes are more inclined to wear a watch on the wrist that corresponds to the side of their brain that dominates their personality.

Which Wrist Should you Wear Your Smart Apple Watch on?

Though smartwatches are a relatively recent invention, in the community, there is a debate as to which wrist you should wear your Apple watch on. The Psychology of Wearing Your Watch on a Particular Wrist

Some believe that people wear their watch on their left wrist because the left side of their brain is dominant. The left hemisphere is associated with ‘typically masculine’ behaviours.

This means that, if you wear your watch on your left hand, you may have psychological traits of good spacial and logical ability. However, others believe left wearers to be spontaneous, cheerful, and outgoing. As the right side of the brain is associated with ‘typically feminine’ behaviours, right-wrist wearers may have psychological traits of creativity and heightened emotion. However, others believe right-wrist watch wearers to be indifferent and practical.

At the end of the day, it’s entirely up to you what wrist your wear your watch on – I doubt anyone would care either way!

But as a rule of thumb:

However, it is recommended that you wear it on your non dominant wrist, to make carrying out daily tasks more comfortable, and subject your watch to less potential damage!

What Sunglasses Do and Should Pilots Wear? Styles & More