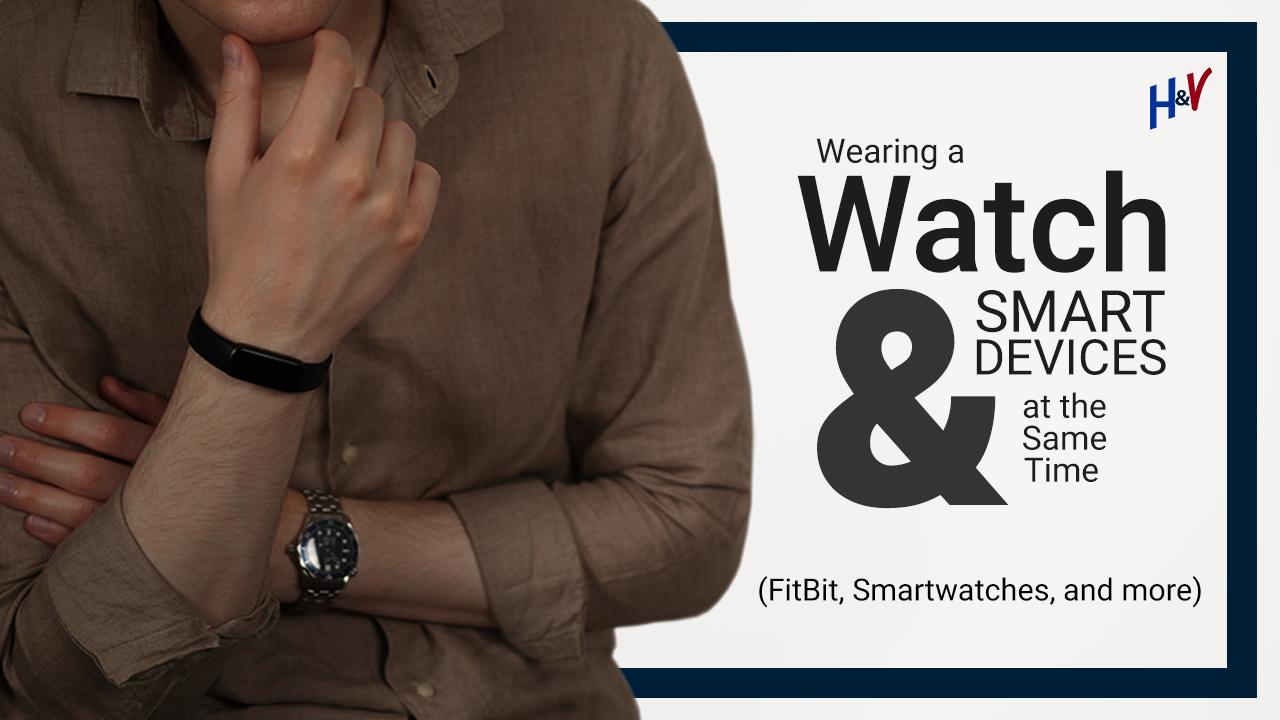 We’re at a strange point in the lifecycle of technology when we have to ask if we can wear a normal watch and smart wearables, such as a Fitbit, fitness tracker, or smart watch, at the same time.

It’s reasonable to want to combine the advantages of both wrist apparatuses, but you may not be sure if it’s socially acceptable or looks strange, and if there are some ‘rules’ you should stand by when attempting this style manoeuvre.

Read on to find out if you can wear a watch with different types of wrist bound smart devices, such as Fitbits and Apple Watches, and if you can, how to do so while remaining stylish.

A ‘fitness tracker’ is a smart wearable, usually worn on the wrist, whose primary focus it is to record fitness vitals, such as heart rate, and calories burned. They usually also have a display for the time on their home screen.

You can wear a watch with a Fitbit or fitness tracker. However, you should wear them on different wrists, ensure your fitness tracker is as slim as possible, and turn the display off. In fact, my Reddit and Quora survey found that the public agree with me, with  19/20 (95%) respondents feeling that it was acceptable, if done correctly.

Some of my favourite comments I found during my research include:

“It’s a practical way to get the best of both worlds.” –  User Black 5

“The flex 2 has a small profile that doesn’t make me look like inspector gadget.” – User Acroptek

That said, you should stick by a few principles for it to look correct.

How To Wear a Wrist Watch and a Fitbit/Fitness Tracker

When you’re looking to pull this move off, as alluded to, you should ideally take a few things into account:

A Hack To Help Wear Fitness Trackers With Watches

If your fitness tracker is slim enough – yes, I’m looking at you again Fitbit Luxe – you could introduce simple decorative bracelets on the same wrist as your fitness tracker, Johnny Depp style, to provide even greater visual separation. This would help the fitness tracker blend in to your style, potentially removing the problem all together.

To take this to the next level, if you don’t have one already, you could look at getting a fitness tracker that is very non descript, such as the ‘Fitbit Flex 2’, which just looks like a wristband.

That said, for wrist bound devices, it is still recommended to wear them on the opposite wrist.

A ‘smartwatch’ is another type of smart wearable, always worn on the wrist, which has additional functionality on top of recording fitness vitals, such as a more elaborate time and date display, and the ability to take phone calls, and surf the web.

This includes devices such as the Apple and Samsung watches, Garmin smartwatches, and Fitbit’s ‘Sense’ and ‘Versa’ lines.

You should not wear a regular watch with a smart watch, as there is too much duplicated functionality, making a regular watch redundant. Moreover, they look too similar, so create visual awkwardness.

Sadly, this is even the case if you wear them on different wrists; they simply look, and act too similarly, so it’s strange to be wearing both at the same time.

Again, I did a survey of the general public, and the majority also agree with me on this one, with 8/11 (73%) respondents feeling this combination is not acceptable.

How Can You Wear Both Watches and Smart Watches

To get use out of both your smart and regular watches, there are a couple of things you can try.

Firstly, if you’re a more of a casual fitness enthusiast, there’s nothing saying you have to permanently commit to one type, all day, every day. I feel the right smart watch can look great with casual outfits, whereas the right ‘normal’ timepiece can take a formal look to the next level, compared to any smartwatch; there’s place for both.

But I do understand that there are some who want an overview of their fitness vitals, and the ability to take calls, and answer emails on the go, 24/7.

For this, I can only recommend my personal routine of wearing a small, light, non intrusive fitness tracker (such as the Fitbit Luxe), following the rules mentioned above, to constantly track my vitals, while wearing a regular watch on my other wrist, for style and practical purposes, and relying on my phone to take calls and surf the web.

With this setup, I get the benefits of both devices, the style and practicality of a watch, and the fitness tracking and internet access of a smartwatch, while having the larger, more practical screen of a phone, without looking out of place.

Alternatively, you could look at ‘hybrid watches’, that look like a mechanical watch, but are actually a smartwatch, such as the Garmin Vivomove HR.

Can You Wear a Fitbit and an Apple Watch/Samsung Watch

The final combination of wrist wearables is wearing both a Fitbit and a smartwatch, such as the Apple Watch, at the same time.

Though this might sound strange, as an Apple Watch has the same functionality, and more, compared to a Fitbit, there are many valid reasons for wearing both systems simultaneously, such as wanting the functionality of an Apple Watch, while preferring the Fitbit software, or simply wanting to build on your existing Fitbit data.

In this case, it’s up to you to decide, but I would personally choose one tracker type and stick it with.

I don’t think it’s useful or practical to measure the same data twice, and it could visually look odd.

This also goes for brands like Fossil who offer smartwatches and smart bracelets (fitness tracker) that look like their analogue counterparts (mechanical watch and bracelet respectively). You remove any visual clash, but huge overlap in functionality remains.

If you really wanted to pair a traditional looking fitness tracker and smartwatch, you could potentially pull it off if you follow the same rules as wearing a watch with a fitness tracker (of course, subbing in a ‘smartwatch’ in place of a mechanical watch), with perhaps a greater emphasis on your Fitbit having a ‘slim’ profile, or a very ‘fitness-tracker-esque’ design, to make them look as different as possible.

This is even more true if one of the items you have is one of these ‘disguised’ products, that look non descript.

Though it’s not ‘wrong’ to do anything else, it may be aesthetically questionable, and garner some strange looks and comments from those around you.