Most James Bond fans can agree that Quantum of Solace is a mediocre film, especially when it has the task of following on from Casino Royale.

However, one saving grace is the wardrobe and style of the picture, which many feel is one of the best in the series.

And an element of this is the film’s sunglasses, which are totally awesome, and help tie everything together.

The sunglasses worn by James Bond in 2008’s Quantum of Solace are the Tom Ford FT108 in the 19V colouring option. They feature a silver matt rhodium frame, blue lenses, and black ear tips with the signature embossed metal Tom Ford logo.

Read on for more details about the sunglasses worn by James Bond (Daniel Craig), Rene Mathis, and everyone’s favourite Bond villain, Dominic Greene, in Quantum of Solace, and where to get them.

As mentioned, the sunglasses that Bond wears are the Tom Ford FT108s, in ‘silver’.

They are a nontraditional variant of the typical aviator sunglasses style, with the teardrop lenses being slightly larger and more evenly rounded than the typical shape. To add to this, they lack a bridge, but make up for it by having a thicker than usual top bar. 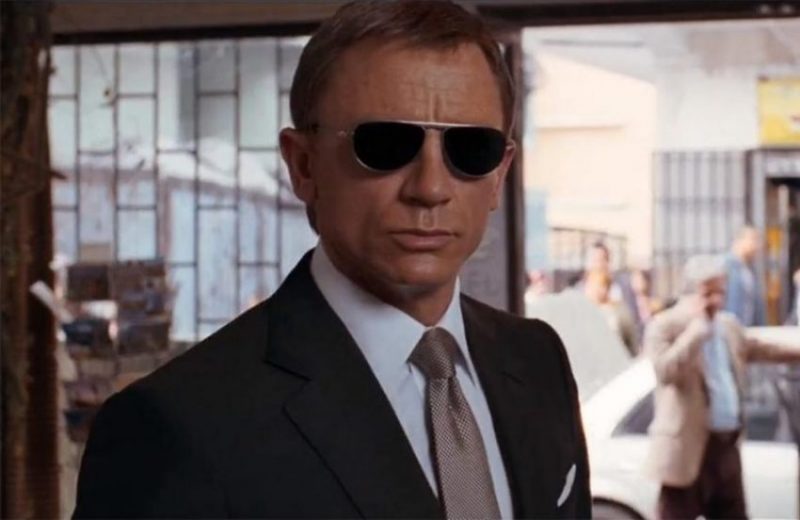 The sunglasses feature heavily in the film, most notably when Bond visits Mathis in Italy, and in the following Bolivia airport and hotel scenes.

This confirms that the sunglasses are versatile enough for wear in both casual and formal situations, as they look awesome in both scenarios.

Taking this into account, and the fact that they’re slightly unusual, I would definitely recommend looking into bagging yourself a pair – it’s unlikely you’ll be seeing many people with similar shades.

Like all other ‘Tom Ford’ sunglasses, they are produced in Italy by the sunglasses conglomerate Marcolin, and, as they were made especially for the film, come in an exclusive ‘James Bond’ Tom Ford case.

These frames are very similar to the ‘Airman’ by Oliver Peoples, which have been discontinued.

Where to buy Bond’s Quantum of Solace Sunglasses

Unfortunately, the original Tom Ford FT108s have been discontinued, making acquiring them a difficult and expensive business.

However, I have seen pairs in the 28L colour option selling for less than this price bracket.

As the original frames are hard to come by and are very expensive, the next best thing are replica offerings, which surprisingly do exist.

The New Zealand based Magnoli Clothiers offer a pair that emulate the original Quantum sunglasses very well, which is good news, as they are the only replica I can find.

The product currently has four stars on their website, and capture the look and feel of the original frames perfectly. On top of this, the lenses feature UV400 protection, so not only do they look like the real deal, but do just as good a job at protecting you from the sun.

Here is a video from David at The Bond experience covering a prototype version of the glasses that he was sent:

Though there is no concrete confirmation, it is thought that the sunglasses that Mathis wears in Quantum of Solace are the Ray Ban Caravans, RB3136, with a gunmetal frame, and grey lenses.

This square aviator style has been around since the 1950s, and provides a good alternative for someone who either doesn’t look good in traditional aviators, or wants something a bit more alternative and less mainstream.

Some people think that these sunglasses could be the ‘Victory’ by Oliver Peoples, though I feel the shape isn’t 100% correct, and the bridge frame is too low.

Where to buy Mathis’ Sunglasses

These sunglasses can actually still be bought and acquired easily from Ray-Ban for around £130.

Here is a good review of the shades:

For all of you Dominic Greene fans (joke, he has no fans), I’ve got you covered.

In Qunatum of Solace, Dominic Greene wears the Cutler and Gross 0425s. They are made from thick plastic acetate, and are in the ‘brown stripe’ colour. He wears them in the Haiti scenes when meeting with General Medrano.

These sunglasses are made in Italy, and come from the reputable British heritage brand ‘Cutler and Gross’, who have produced frames for other films such as the ‘Kingsman’ series, and Silence of the Lambs.

Where to buy Greene’s Quantum Sunglasses

Unfortunately, these sunglasses are sold out, and do not have any replicas. However, like with other discontinued frames, you may be able to find a pair on e-bay.

So now you’ve seen a quick overview of most of the sunglasses from Quantum of Solace.

Unfortunately most of the original frames are discontinued, but in the case of James Bond’s sunglasses, the provided replica substitute should work very well for most people.

But, in case you’re not feeling any of the frames in this exact post, I would recommend for you to check out my post on Bond’s sunglasses from 2015’s Spectre, which covers more stylish, available, and affordable picks to help you up your eye wear game.